The past week in South Africa has seen yet another spate in unnecessary crimes, violence, evictions, and farm murders. The COVID-19 pandemic has, without doubt, contributed towards far more serious and reaching issues within our country. The never-ending stories which reach the front pages of our news daily will only continue unless the Government can get a handle on its citizens.

The brutal murder of a pregnant woman in Weenen over the weekend, whose throat was slit by her attackers who were seemingly trying to rob the farming family for cash has left a husband without a wife, and two children without their mother.

The forced eviction of Bulelani Qolani who was dragged naked from his home in Khayelitsha by law enforcement officers taking matters into their own hands, has made headlines, and rightly so.

Even our President, Cyril Ramaphosa has acknowledged that South Africa had among the highest levels of intimate partner violence in the world, and that as much as 51% of South African women have experienced violence at the hands of someone with whom they are in a relationship.

The Minister of Police Bheki Cele has also admitted that the lifting of the ban on the sale of alcohol since the beginning of lockdown Level 3, has ushered an unwanted surge in reported deaths.

Whilst the crime statistics in South Africa may have dropped during the initial lockdown in our country, since the lifting of the lockdown from Level 5 to Level 3, there has been a dramatic increase in violent crimes, evictions and murders.

South Africa is in turmoil. Our Government and its people are fighting more than just a viral pandemic, and if nothing is done to seriously address the hard hitting fact that our country is on the path of destruction the story will end, and the ending will be a very sad one. POSSIBILITY OF ANOTHER HARD LOCKDOWN!Uncategorized 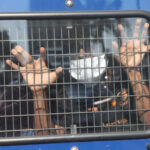